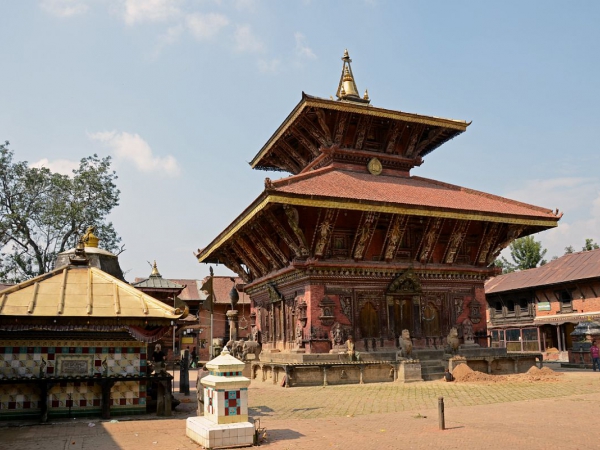 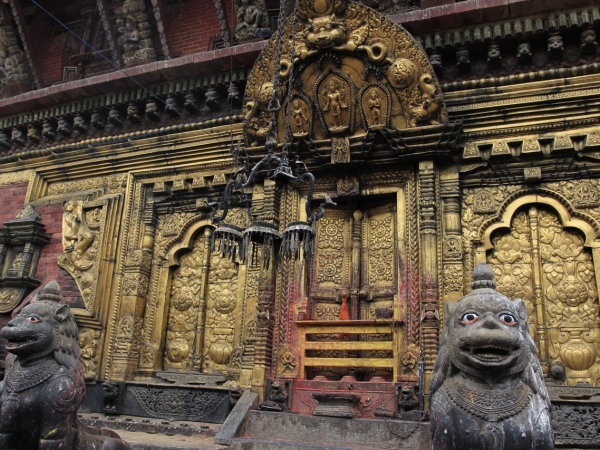 CHANGUNARAYAN: (UNESCO-Herritage site)The Changu Narayan temple stands majestically above the rice fields of Bhaktapur. Dedicated to Vishnu, the Preserver the temples origins go back to the 4th century. A fifth century stone inscription in the temple proclaims it as one of the oldest shrines of the Kathmandu Valley. The temple is a showcase for Newari art and architecture of the early century. The stone, wood, and metal craft found here are exemplary. On the struts of the two-tiered Changu Narayan Temple, are ten incarnations of Narayan. And a 6th Century stone statue shows the cosmic form of Vishnu. Garuda, half man and half bird, is the vehicle of Vishnu, and his life-size statue kneels before the temple.

Some important sculptures of Vishnu seen here are:Vishwaroop: This highly valued sculpture represents Vishnu in his most universal form. It dates back to 8th century A.D.Vishnu Vikranta: - This stone image, dating back to the 8th century A.D., is one of the most powerful forms of Vishnu. This is when he measured space with his feet.Vishnu riding on the Garuda (the mythical bird) - this figure of Vishnu mounting Garuda dates back to the 10th Century A.D.Narsimha Vishnu - this form of Vishnu is seen in his half man and half lion form.The stone inscription (dated 464 A.D.) placed in front of the Changu Narayan temple describes in detail the story of Dharmadeva, a Nepalese King who died suddenly, with his young son succeeding him to the throne. It is said that later the son after a series of victories in war inscribed the victory on a stone pillar and placed it in front of the Changu Narayan temple. It is written in verse and in an academic Sanskrit which is akin to an encyclopedia about the society of the time, its tradition and culture. It starts with an invocation to the Vishnu of Doladri proving that Changu Narayan or the Doladri Narayan is much older than the date on the inscription of 464 A.D.