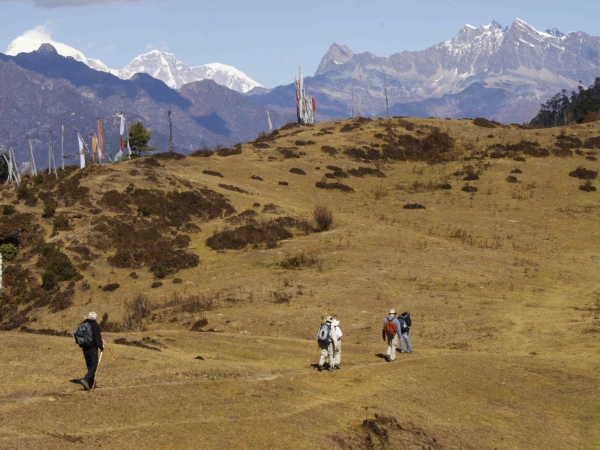 The Druk Path Trek is a moderate, six-day trek. This popular trek offers beautiful views as you cross the chain of mountains that separate the Paro and Thimphu valleys. This route is also famous for its spectacular rhododendron forests and wonderful high altitude lakes teeming with fish. There will be a number of temples and dzongs to visit on the way, and in the clear weather of late autumn and winter there are great views of the Himalayas. As well as being able to visit the sites of Paro and Thimphu before and after the trek, you may also enjoy a day excursion to the Punakha valley to visit the imposing Punakha Dzong.

Day 1 : Arrival Paro
Pick up from Paro Interational Airport (2280m) and drop to hotel. If time available visit Paro town in the afternoon. Overnight at Hotel

Day 2 : Paro Sightseeing
After breakfast, visit National Museum housed in Ta-Dzong which was built in 1656 and served as the watch tower of Paro Dzong in the past. Visit Paro Dzong, also called the Rinchen Phug Dzong which means fortress on a heap of Jewels. Built in 1644, Paro Dzong is one of the most impressive and well-known dzongs of Bhutan. After lunch in town, proceed towards Drukgyel Dzong, 14 kilometres from Paro town. Also known as the fortress of victory Drukgyel Dzong was built by Shabdrung Ngawang Namgyal in 1649 to commemorate the victory over Tibetan invaders. Return to the hotel. Dinner in hotel.

Day 3 : Takshang Sightseeing
After breakfast, drive for about eight kilometres north of Paro town to visit Bhutan's most well known monastery, Taktshang or Tiger's Lair perched on a cliff 900 metres above the valley floor. Legend has it that Guru Rinpoche, who brought Buddhism to Bhutan in the eighth century flew to Taktshang on a tigress and mediated for three months. The trek to the monastery and back takes about four hours. Lunch will be served in the cafeteria near the monastry. Afternoon prepare for the Druk Path Trek.

Day 4 : National Museum (Paro) to Jili Dzong
Distance 10 kilometre, time 5 hours After an initial steep climb, the trail passes through farms and blue pine forests before reaching the big stone house at Damchena (2880m), the camp for the night.

Day 5 : Jiji Dzong to Jangchhu Lakha
Distance 10 kilometres, time 4 hours. On a clear day you can view Paro valley below and the mountains peaks nearby from Jili Dzong. The route to Jangchhu Lakha is a long walk along a ridge through forests filled with rhododendrons in bloom. Jangchu Lakha is a pasture area at 3760 metres. Camp at Tshokam.

Day 7 : Jimilang Tsho to Simkotra
Distance 11 kilometres, time four hours The walk to Simkotra and has several ups and downs before reaching Janye Tsho (4050m). From the Tsho the trail goes up to a yak herder's camp to a ridge and down to Simkotra Tsho (4110m).

Day 8 : Simkotra Tsho to Phajoding
Distance 11 kilometres, time four hours The view of Dochu La and Jhomolhari can be seen on this route which. The camping place is at 4110 m near a stone hut beside an almost dry lake at Labana. From here the route leads to a crest at 4120m, then drops and crosses a final ridge at Phume La(4080m). From this point the Thimphu Valley down below is visible. After walking through juniper and rhododendron bushes, the route leads to a camp site above Phajoding at 3750m. Many lhakhangs and meditation centers are scattered across the hillside. The camp site is nearby the Phajoding Goemba.

Day 9 : Phajoding to Motithang (Thimphu)
Distance five kilometres, time three hours The last part of the this trek route is downhill through forests and ends at a point above the Motithang Youth Center at 2520m.

Day 10 : Thimphu Sightseeing
Sightseeing in Thimphu (2320m) includes visits to : National Library which was established in 1967 and has many ancient Dzongkha and Tibetan texts); Painting School or the National Institute for Zorig Chusum (the 13 traditional arts and crafts like painting, woodcarving, embroidery and statue making); National Memorial Chorten which was built in 1974 in memory of the third King of Bhutan;Semtokha Dzong which is about five kilometres south of Thimphu. Semtokha Dzong was built in 1629 by Shabdrung Ngawang Namgyal. Today it houses the Institute for Language and Culture Studies; Tashichhodzong the seat of the government of Bhutan. It houses the secretariat, the Throne Room, His Majesty's secretariat, the Ministry of Home and Cultural Affairs and the Ministry of Finance. If the sight seeing falls on the weekend you can visit Thimphu's open vegetable market where farmers from the nearby regions gather to sell their produce.

Day 11 : Thimphu to Dochula- Thimphu. Lunch in Thimphu. Thimphu to Paro
The journey starts after the breakfast to Dochula (3140) about 23 kilometres from Thimphu. On a clear day it offers spectacular views of the Bhutan Himalaya. After Tea/Coffee in the Dochula Cafeteria return to Thimphu for Lunch and continue to Paro. Overnight halt in Paro.

Day 12 : Departure
After an early breakfast, our representative will see you off at the Paro International Airport.

Airfare into Bhutan including taxes.

All private excursions and transfers in superior air-conditioned vehicle.

Cook and camp hand who will take care of camp chores and provide wholesome meals.

Services of horsemen who will look after the yaks & ponies that transport luggage and camp gear.

All meals in Bhutan.

All entrance fees and permits.