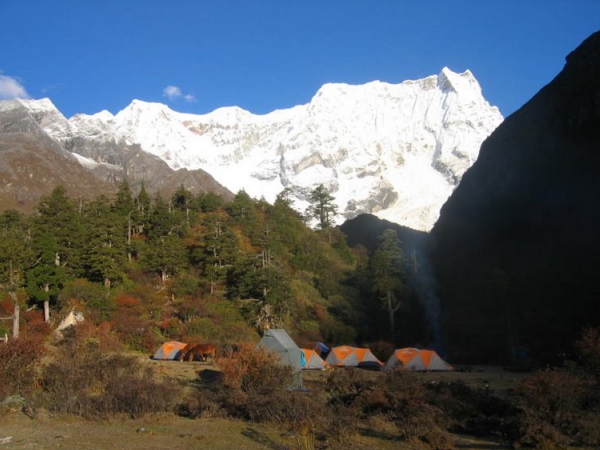 This route offers a great variety of trekking conditions, from picturesque farmland and forests to alpine pastureland and High Mountain passes (16,100 ft). Spectacular campsites, beneath some of Bhutans most impressive peaks, of which the most notable are Chomolhari and Jichu Drake, are also features of this trekking route. Numerous isolated dzongs and scattered settlements, including the extraordinary village of Laya, and the Gasa hot springs make this trek one of the most popular.

Day 21 :Departure After an early breakfast, our representative will see you off at Paro airport

Day 1 : Arrival Paro
Pick up from Paro Interational Airport (2280m) and drop to hotel. If time available visit Paro town in the afternoon.

Day 2 : Paro Sightseeing
After breakfast, visit National Museum housed in Ta-Dzong which was built in 1656 and served as the watch tower of Paro Dzong in the past. Visit Paro Dzong, also called the Rinchen Phug Dzong, which means fortress on a heap of Jewels. Paro Dzong is one of the most impressive and well-known dzongs of Bhutan and was built in 1644. After lunch in town, proceed towards Drukgyel Dzong, 14 kilometres from the Paro town. Also known as the fortress of victory, Drukgyel Dzong was built by Shabdrung Ngawang Namgyal in 1649 to commemorate the victory over Tibetan invaders in 1644. Return to the hotel. Dinner in hotel.

Day 3 : Takshang Sightseeing
After breakfast, drive for about eight kilometres north of Paro town to visit Bhutan's most well known monastery, Taktshang (Tiger's Lair) perched on a cliff 900 metres above the valley floor. Legend has it that Guru Rinpoche, who bought Buddhism to Bhutan in the eighth century flew to Taktshang on a tigress and mediated for three months. The trek to the monastery and back takes about four hours. Lunch will be served in the cafeteria near the monastry. Afternoon prepare for the Druk Path Trek.

Day 5 : Shana-Thangthangka
Distance 21 kilometres, Time 7-8 hours. The trail follows the river through dense forests with a few isolated farmhouses. After a while it narrows and closes in and winds up and down and passes a junction where another path leads north to Tremo La. Tibet. Camp in a meadow with a stone shelter. Altitude 3610 m

Day 6 : Thangthangka-Jangothang
Distance 15 kilometres; Time 5 - 6 hours. After passing a small army post in the morning, the trail slowly leaves the forest line and gradually climbs into a beautiful valley, passing Tegethang, a winter home of yak herdsmen. Lunch in a yak herdmen's hut. A lot of yaks will visible before arriving at the Jhomolhari base camp. High mountains overlook the camp and nearby are the ruins of an old fortress that was used to guard Bhutan against Tibetan invasions. Altitude 4,115 m;

Day 7 : Jangothang (Halt)
Rest day. A chance to acclimatize and walk to the Jhomolhari glacier or to the lakes in the opposite direction.

Day 8 : Jangothang ­ Lingshi
Distance 17 kilometres; Time 6 - 7 hours The Jangthong ­ Lingshi trail is a good day's walk with spectacular views (if the day is clear) of Jhomolhari, Jichu Drake and the Tserim Gang peaks. It is climb from the start up to Nyelela pass (4,700 m) which takes about three to four hours. Then it is a descent to a circular hut just below Lingshi, the camp for the day. The descent to Lingshi provides spectacular views of the truly mystical Dzong atop a high hill. Altitude 4000m;

Day 9 : Lingshi ­ Chebisa
Distance 12 kilometres; Time 4 - 5 hours. Ý The Lingshi Chebisa route is a magical one. Leaving Lingshi behind the trail gently climbs to reach another delightful village, Gom Yu, which sits below a 300 metre cliff. After another few hours the trail enters a little valley with a huge waterfall at one end of the village of Chebisa, the riverside camp spot for the day. The walk is leisurely with plenty of reasons and opportunities to linger. Altitude 3,780m;

Day 10 : Chebisa ­Shomuthang
Distance 17 kilometres; Time 6-7 hours. The day starts with quite a stiff climb through high pastures up the Gokula pass (4,320 m) before dropping through forests of dwarf rhododendron. The trail climbs again gradually descending to the camp near a riverbed. Altitude3, 890m;

Day 11 : Shomuthang ­ Robluthang
Distance 22 kilometres; Time 7 - 8 hours. A long haul over the Jarela pass at 4,640 m where we once again get stunning views of the Himalayan mountains above us. We drop steeply down a forest trail to the Tsarigathang valley, where herds of Takin roam, then cross a knee deep river before climbing up Robluthang, the camp for the day. Altitude 4,100m;

Day 12 : Robluthang - Lemithang
Distance kilometres; Time 6-7hours. The Robluthang - Lemithang trail is one of the hardest of the trek. It begins will a slow climb to Shinchela pass at 4,870 m from where one can view the mountains, including the spectacular Gang Chen Ta at the head of the valley. On a clear day practically all the mountains on the northern border are visible. Eagles, griffin vultures, blue sheep and yaks abound in this area. Altitude 4,040m;

Day 13 : Lemithang ­ Laya
Distance10 kilometres, Time 4-5 hours. The trail follows the river, one of the tributaries of the Mochu, through a forest of rhododendron and silver fir and enters the village of Laya, the home of the Layaps, a unique nomadic community of Bhutan. The layaps wear vertical stripe yak hair clothing and conical bamboo hats. The women wear their hair long decorated with turquoise and jade jewelry. The features of the Layaps are more Tibetan/ Mongolian than the Bhutanese who live in the central valleys Most part of the day is spent at leisure or visiting village houses and mixing with the villagers. Good views of the Masagang and the other peaks. Altitude3, 880m.

Day 14 : Laya (Halt)
Rest for a day and have an opportunity to meet the local people.

Day 16 : Koena - Gasa Tsachu
Distance 15 kilometres; Time: 6/7hours From Koena it is a gradual climb to Balela pass at 3,740 m and then a descent to Gasa village. The first sight of the Gasa Dzong perched on the hillside over the village is one of the hightlights of the trail. From Gasa Dzong it is an a hour's walk down a steep drop to the river and the natural Gasa Hot Springs. Altitude: 2,638m;

Day 17 : Gasa Tsachu - Goen Damji
Distance 21 kilometres, Time 7/8 hours. After the climb away from Gasa Tsachu the trail winds through rolling hillsides with the vista of fields, villages and forests of oak and pine. Gasa Dzong will be visible behind, as if glued to the valley wall, seeming afloat in space. Overnight in camp. Altitude: 2,280 m,

Day 18 : Goen Damji - Punakha (end of Trek)
The trail descends from the high agricultural benches above the Mochu into a lush semi-tropical gorge filled with banana trees, creepers and the sight of an occasional monkey. Overnight in Punakha.

Day 19 : Punakha-Thimphu
After breakfast, visit Punakha Dzong. Punakha Dzong was built in 1637 and was the former capital of Bhutan. It lies at the confluence of the Mo Chu (female river) and the Pho Chu (male river). Punakha Dzong still serves as the winter residence of the Central Monk Body. The construction of the Dzong was foretold by Guru Rimpoche, the tantric saint who brought Buddhism to Bhutan. There was a smaller building there called Dzong Chu (small Dzong) that housed a statue of Buddha. It is said that Shabdrung ordered the architect, Zowe Palep, to sleep in front of the statue, while Palep was sleeping, the Shabdrung took him in his dreams to Zangtopelri and showed him the palace of Guru Rimpoche. From his vision, the architect conceived the design for the new Dzong, which in keeping with the tradition, was never committed to paper. The Dzong was named Druk Pungthang Dechen Phodrang (Palace of Great Happiness). The war materials captured during the battle with Tibetans are preserved here. After lunch, drive to Thimphu. Enroute visit Chimi Lhakhang also called Temple of Fertility built by Lama Drukpa kuenley in 17th century.

Day 20 : Thimphu Sightseeing and Drive to Paro
Sightseeing in Thimphu (2320m) includes visits to : National Library which was established in 1967 and has many ancient Dzongkha and Tibetan texts); Painting School or the National Institute for Zorig Chusum (the 13 traditional arts and crafts like painting, woodcarving, embroidery and statue making; National Memorial Chorten which was built in 1974 in memory of the third King of Bhutan; Semtokha Dzong which is about five kilometres south of Thimphu. Semtokha Dzong was built in 1629 by Shabdrung Ngawang Namgyal. Today it houses the Institute for Language and Culture Studies.); Tashichhodzong the seat of the government of Bhutan. It houses the secretariat, the Throne Room, His Majesty's secretariat, the Ministry of Home and Cultural Affairs and the Ministry of Finance. If the sight seeing falls on the weekend you can visit Thimphu's open vegetable market where farmers from the nearby regions gather to sell their produce. Evening is set aside for shopping in town. Drive to Paro in the afternoon.

Day 21 : Departure After an early breakfast, our representative will see you off at Paro airport

Airfare into Bhutan including taxes.

All private excursions and transfers in superior air-conditioned vehicle.

Cook and camp hand who will take care of camp chores and provide wholesome meals.

Services of horsemen who will look after the yaks & ponies that transport luggage and camp gear.

All meals in Bhutan.

All entrance fees and permits.