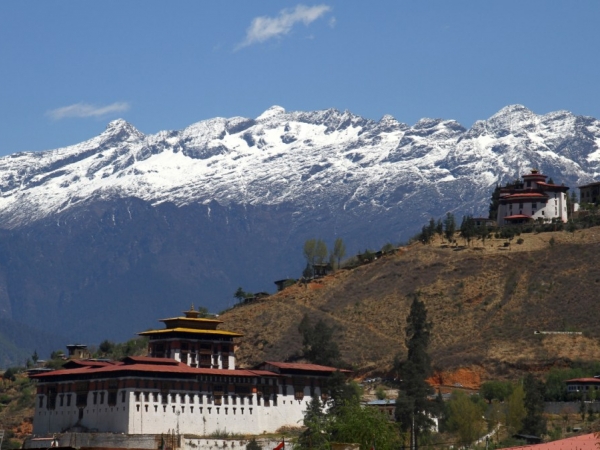 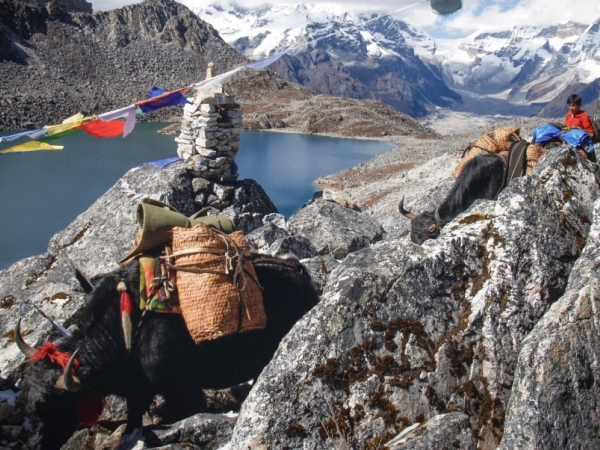 This popular Bhutan cultural tour provides an in-depth view into the ancient way of life and rich culture that still thrives in Bhutan today through the western valleys of Paro, Haa, Thimphu, Punakha and Wangduephodrang. It is a well paced tour, designed to provide the opportunity to really savour the unique highlights of Bhutans western districts which offer diverse mountainous landscapes, a rich Buddhist heritage including monasteries, temples and chortens, historical fortresses and an extremely hospitable people. You will discover the vibrant history of Bhutan visiting the Ta Dzong Museum, Rimpong Dzong with its wooden cantilevered bridge and the infamous Taktsang Monastery (Tigers Nest) in the beautiful Paro Valley. In Bhutans capital, Thimphu, you will visit the The National Memorial Chorten, 12th century Changangkha Temple and the National Library exhibiting ancient scriptures before crossing the 3050m Dochula Pass with its 108 chortens, numerous prayer flags and spectacular Himalayan views into the sub-tropical Punakha Valley featuring the incredible Punakha Dzong and Chimi Lhakang, temple of the Divine Madman.

The Accommodations in Bhutan are approved by Tourism council ob Bhutan. Most of the hotel has attached Bathroom with weatren style toile with hot and cold shower. All hotel offers the necessery facilities.

Most of the places has Restaurent menu with Indian, Chinese and continential food. The choice of your to eat hygenic and testy food.

Day 1 : ARRIVE IN PARO AIRPORT (BHUTAN)
2320m. /1:30 hrs. Drive Arrive at Paro Airport and then drive to the capital city Thimphu. The flight into the Himalayas reveals scenic and breathtaking views of Himalayan Mountains of the world. If weather permits you will be able to see Mt Everest (8848m, 29,198ft) and other Himalayan mountain ranges. After checking into the hotel later visit,Your representative from the agency will greet you on arrival and drive you to the capital city, Thimphu. Tag Dzong:This means – watch tower, which it served as during the 17th century to guard the region from the Tibetan invasion. It was converted to the National Museum in 1968. It houses a fine collection of Bhutanese art, relics, religious thankas (used to bolster the visualization generated during meditation and were made from Himalayan animal fibers), paintings, animals found in Bhutan, arms and ammunitions and the country’s exquisite stamp collections. Tashichho Dzong : The names means – Means Fortress of Glorious Religion. It was built in 1641 by Zhabdrung Ngawang Namgyel. It houses the secretariat building; the throne room and the office of the king, and the central monk body.Later relax for the day and stroll around the city. Overnight in Thimphu

Day 2 : IN THIMPHU
Morning visit the Memorial Chorten:This particular chorten was constructed in 1974 as a memorial for the third King of the country, King Jigme Dorji Wangchuck, who is widely regarded as the father of modern Bhutan. Visit Changgangkha lhakhang and later Visit Zilukha nunnery in Drubthob Goemba: Thimphu is biggest nunnery in Bhutan. The Nunnery and Goemba once it belonged to the Drubthob (Realized one) Thang Thong Gyalpo often referred to as The King of the open field. In the early 15th century with his multiple talents he popularly became the Leonardo da Vinci of the Great Himalayas. Simtokha Dzong: Zhabdrung Ngawang Namgyal was one of the greatest builders of Dzongs in Bhutan and to consolidate his newly acquired domain in western Bhutan and to defend himself from both the internal foes and external enemies started the constructions of six Dzongs. The first Dzong that he undertook to construct was the Simtokha Dzong. The location has a great historical significance. The present place where the Dzong stands was the crossroads of the three prominent western regions of Sha (Wangduephodrang), Wang (Thimphu) and Pa (Paro). The Dzong was successfully completed in 1631 corresponding to the Iron Sheep Year of the Bhutanese calendar after two years. The Dzong was named as “Sanga Zabdhoen Phodrang” (Palace of the Profound Meaning of Secret Mantras). Later Visit the weekend market in Thimphu: Held every Friday, Saturday and Sunday, the people crowd the stalls every day, dressed in full colour and gathered to meet and to barter, much like the street markets in London! Overnight in Thimphu.

Day 3 : THIMPHU TO GANGTEY
Altitude: 2800m/ 9240ft above sea level (5 hours drive) Morning driving towards Gangtey, we come across a pass known as Dochula (3140m, 10362ft) from where a beautiful panoramic view of the Himalayan mountain range can be seen, especially in clear winter days. The beauty of this place is further enhanced by the Druk Wangyal Chortens- a 108 stupas built by the eldest Queen, Her Majesty Ashi Dorji Wangmo Wangchuck. In the mountains east of Wangdue Phodrang lies the beautiful Phobjikha valley, on the slopes of which is situated the great monastery of Gangtey, established in the 17th century. The village of Phobjikha lies a few km. down from the monastery, on the valley floor. This quiet, remote valley is the winter home of black necked cranes, which migrate from the arid plains of Tibet in the north, to pass the winter months in a milder climate. Overnight in Gangtey.

Day 4 : GANTEY TO TRONGSA
Altitude: 2200m/ 7260ft above sea level. (5 hours drive) Morning you will hike across Gangtey Nature Trail: (Duration: Half day: two hours at a quicker pace): This is one of the most beautiful and shortest of the existing nature trail. In this trail you have the opportunity to visit the magnificent Goemba(Monastery), it also leads to sloping area of green grass, flanked by pine trees on either side. You will even come across some villages, rivers, crane roosting ground. Trongsa Museum: Situated strategically above the Trongsa dzong, the Ta Dzong served as the watch tower for centuries. It was built by Choeje Minjur Tempa in 1652.The museum is equipped with state of the art technology and includes a media room where visitors can watch a documentary programme on the history of the monarchy.The Ta Dzong was renovated and converted as a museum at a cost of Nu. 97 millions with funds from the Austrian government. The museum is dedicated to the coronation and centenary celebrations. Overnight in Trongsa.

Day 5 : TRONGSA TO PUNAKHA
Altitude: 1350m/ 4455ft above sea level. (6 hours drive) Morning drive to Punakha visit Punakha Dzong (fortress): Built in 1637 by Zhabdrung which is remarkably located between the rivers of Mo (Female) Chu (river) and Pho (Male) Chu. Until the time of second king it served as a seat of the king. Hike to Chimi Lhakhang(Temple of fertility): This Temple was built by lam Drukpa Kuenley (The Divine Madman) in 1499. It is about thirty minutes hike across fields from the road –Wooden phalluses are often found hanging in the four corners of the houses and also phalluses are painted on the walls of houses. It is the common belief that this helps in driving away evil spirits.(30 minutes hike to and fro, gentle steep, good footh path across the valleys and villages). Overnight in Punakha/Wangdue.

Day 6 : PUNAKHA/WANGDUE TO PARO
Altitude: 2280m/7524ft above sea level. (4 hours drive) Morning drive to Paro and visit, Rimpung Dzong: The Bhutanese Dzongs are huge architectural structures constructed for a variety of functions throughout the country, from administrative buildings to monasteries and temples, yet they are carefully and thoughtfully designed and are strikingly beautiful. The Rimpung Dzong, known as the “fortress of the heap of jewels” in the picturesque setting of the Paro valley, is of course no exception, built in the time of the dynamic spiritual and political leader Zhabdrung in 1644. Once a year, as part of the Tsechu festival, one of the oldest Thongdol (gigantic scroll paintings) is ceremonially unfurled here. Kichu Lhakhang(Monastery): It is one of the two most sacred and the oldest temples in Bhutan. It was built in 7th century by Tibetan King Songtsen Gampo. Drugyel dzong: This ruined dzong is of historical importance. It was built in 1649 by Zhabdrung to commemorate the victory of the Drukpas over the Tibetan invasion in 1644. The Bhutanese still vividly recall and celebrate this victory which was tremendously important to the history of the area. On a clear day (7326m/ 24176ft), you have a fascinating view of the white domed peak of sacred Jhomolhari (Mountain of Goddess). Overnight in Paro.

Day 7 : IN PARO
Morning hike to Taktshang Monastery (Tiger’s nest): This is Bhutan’s most recognizable cultural icon perched 800m/2640ft up a seemingly sheer cliff. Although it was tragically and mysteriously consumed by fire in April 1998 it has now been restored to its former glory. It is believed that in the 8th century, the great tantric master Guru Rimopche/ Padmasambhava (2nd Buddha) flew on the back of a tigress to the site where the monastery now stands. (Five hours hike to and fro, some gentle and some steep hike, some stony foot path and some good ones) If you ride a horse upward it will cost extra US$25 per person. Visit Farmhouse: Picturesque farm houses dot the valley amongst fields and hillsides. We welcome you to enjoy the hospitality of the Paro farmers. Thrill yourself as the farmers welcome you to their homes with genuine smiles. The two to three-storied Bhutanese farm houses are handsome in appearance, with colorfully decorated outer walls and lintels, and are traditionally built. A visit to a farm house gives an interesting glimpse into the lifestyle of a farming family. (If you take hot stone bath in the farm house it will cost extra US$25 per person.) Later stroll around the town and see how locals live. Overnight in Paro.

Day 8 : DEPART FROM PARO
After Breakfast drive to the airport and Final Departure

A minimum of 3 star accommodation (4 & 5 star may require an additional premium).

All meals (Breakfast-Lunch-Dinner) Full Board

A licensed Bhutanese tour guide for the extent of your stay

All internal transport by private car

A sustainable tourism Royalty of $65

All internal taxes and charges